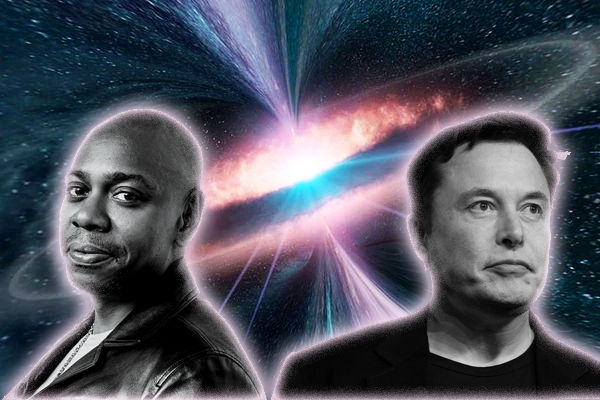 HOUSTON, TX — Scientists at NASA are furious at comedian Dave Chappelle after what they described as a “Close call for humanity” on Sunday.

NASA Administrator Bill Nelson explained, “We cannot allow people to be this reckless. Chappelle should know it’s dangerous to give a public platform to someone who is being canceled.” Referring to Elon Musk, the owner of the world’s most popular public platform.

“And what’s worse, Dave also shouldn’t have a public platform. Everyone knows that Dave Chappelle is wildly unpopular. So, when he casually invited Elon Musk on stage in front 18,000 of his fans, he created the perfect storm.”

While the comedian surely didn’t intend to trigger a cosmological disaster, Nelson explained exactly why his actions almost did just that.

“You see, cancel culture has its own sort of gravity. It sucks people in very effectively. So, when two subjects of cancel culture come into contact with one another, their gravity combines and becomes so strong that it can actually collapse onto itself, creating a Cancel Culture Singularity. A CCS, as we call it, has gravity so immense that not even rational opinions can escape.”

Luckily, however, after running simulations in NASA’s space lab, it was determined that Chappelle and Musk’s gravity alone was not quite strong enough to trigger a full-scale Cancel Culture Singularity.

“This was incredibly close to being a global catastrophe.” Nelson explained, “I mean, had they brought Kanye West, or — God forbid — Joe Rogan on stage with them, we’d be having a very different conversation. Giving three of them a platform simultaneously could completely end life as we know it.”

We reached out to Dave Chappelle via text message for comment, who quickly replied, “New phone, who dis?”

Elon Musk’s legal team also prepared a response to last night’s near-disaster, but stated that we could only view it if we “Pay $8.”